The 2014 Cherry Creek Arts Festival was part Old Curiosity Shop wonder and slick new organic shapes and colors.  The miles of booths brought to mind memorabilia of another time and place.  I noticed the trend for recycled-objects-art was waning and there were few fine art photography booths. This show was unusual but lovely with its odd, nostalgic, narrative tone. Contemporary art mixed elegantly with classic, vintage themes, style and colors.

The art work below is exactly why I came away with ‘nostalgia’ in my conscientiousness. See for yourself. 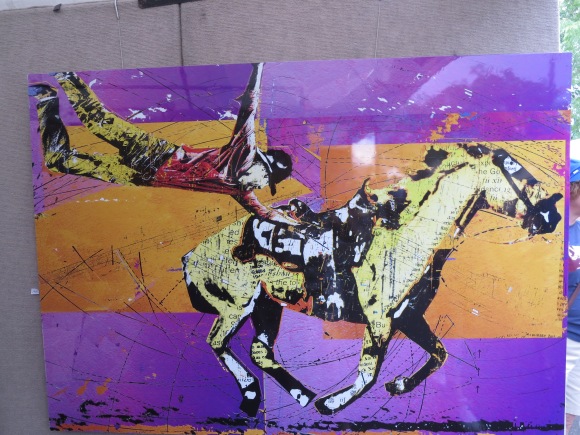 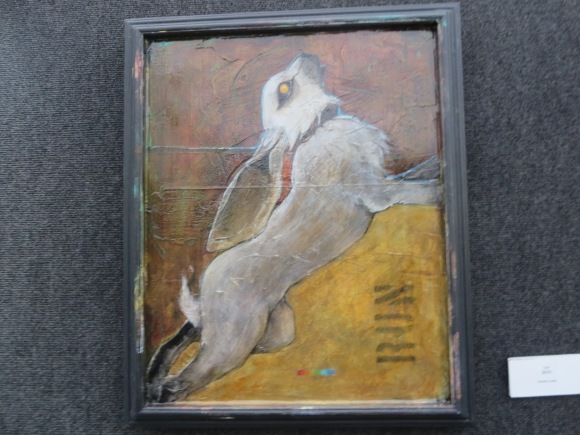 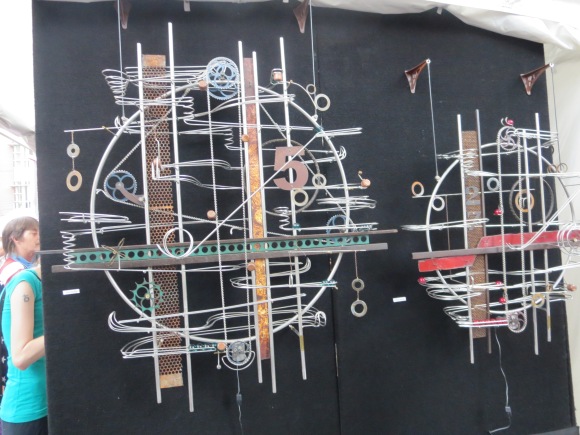 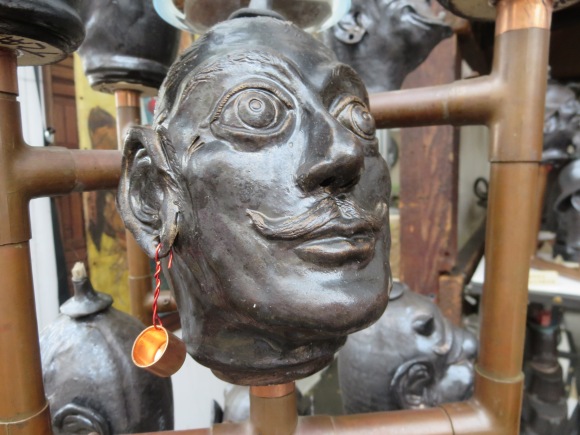 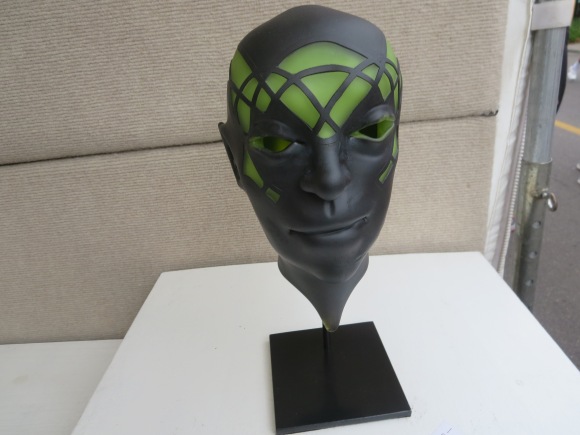 I was enchanted with the sepia intonations in many of the works, and the use of multi-mixed mediums to create a work of art. The brown & black, pen & ink drawn and colored over a collection of old music sheets was typical and original.  I was transported to the pages of Grimm’s Fairy Tales and the bewitching art of early children’s book illustrations, prints and re-touched photography. The feeling I took away from the festival was, let me say, a circus poster.  Colorful exquisite details in the art,  elegantly reminiscent of an eye-popping, vintage color poster that brought a sense of excitement to the moment. I felt like the circus was coming. 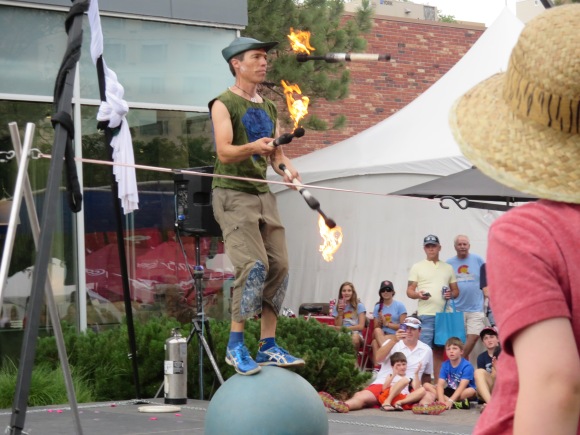 First Fridays are stressful. You start by asking yourself which galleries do I want to visit first, then, on paper or in your head, you must keep track of time, crowds, parking and just how many art districts you can visit from 6 p.m. til 9 p.m.

Abend has a strong reputation for quality art but, owner, Chris Serr‘s real genius is in selecting unknown, accomplished artists.   One of my favorite new artists, I’ve only seen at Abend is Elsa Sroka.  Her Bovine series had me thinking I want a cow on my living room wall. Sroka wasn’t technically in this show but her cows were hanging here & there throughout the gallery.

Our landscape artists are pretty lucky.  They don’t have to travel far from their studios to capture a snowcapped mountain or a frozen river bed. Abend’s meditative show conveyed majestic Colorado scenes painted by artists who recognize the hourly difference between vibrant, atmospheric colors of fall, winter, summer and spring, snow resting gently on spring flowers. They know a thing or two about using the complete range of the color spectrum to explain a 2-D Western sunset. If you believe an artist speaks through his work, these paintings tell beautifully quiet, narratives about the West.

Abend Gallery is a good stop after an kick-ass week. Take your time and absorb the beauty of the West and the spectacular scenery at the corner of York & Colfax. This show goes through May 3, 2014.

3rd photo – Trevor, the best gallery assistant ever. He has been working with his mom since he was fourteen years old. We’ve watched him grow into a creative photographer and superb gallery administrator.

5th photo – look who I ran into – artist, Desmond O’Hagan. 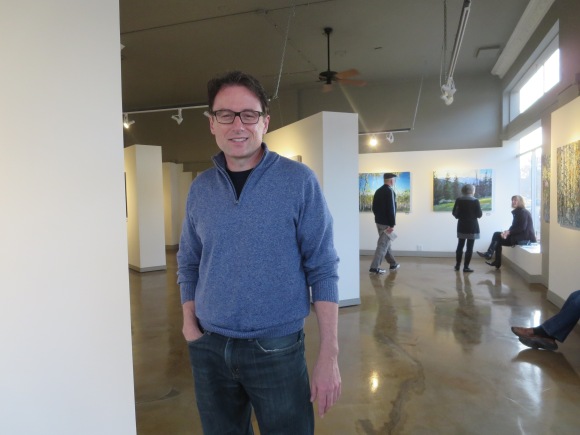 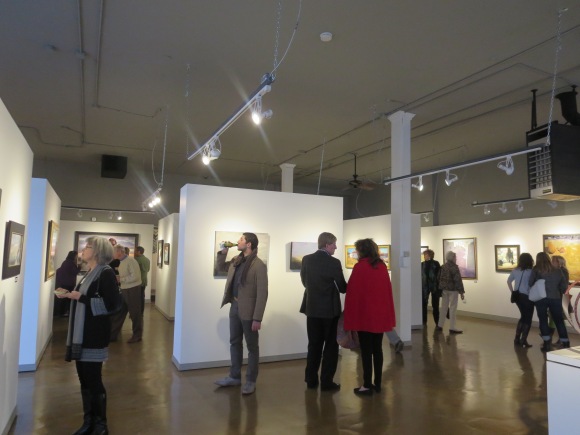 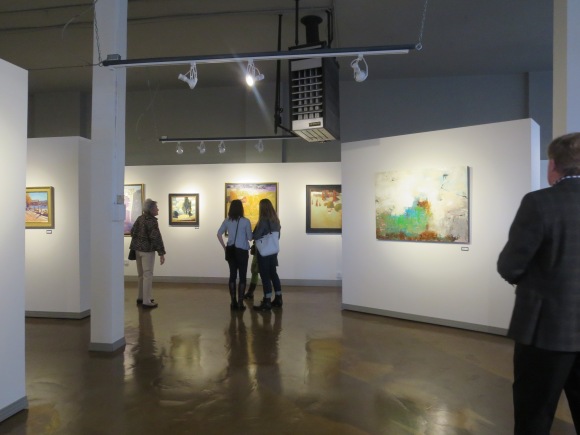 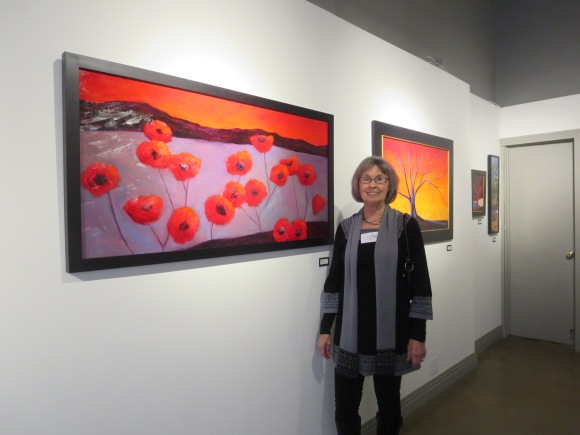 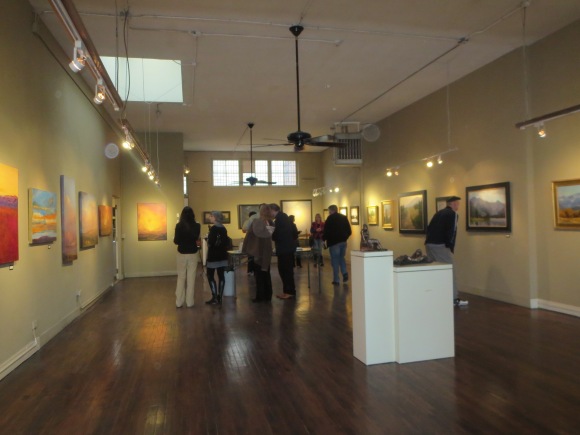 Who wants to play hopscotch?

The Larimer Street Chalk Art Festival was so crowded I had to push babies out of their strollers and step over little ole ladies in wheelchairs simply to elbow my way past the never-ending lines of looky-loos to snap a photo. The artists were hunkered over their drawings, nose-to-the-scorching-hot pavement – no shade, whining kids, baby carriages the size of a Fiat, paranoid dogs, spilled drinks and ice cream cones melting into their work space. They were troopers, smiling and chalking to the finish. I applaud them all for their tenacity and dedication to the event. The finished pieces were spectacular. Because I could not get at decent angles nor close enough to grab cards, I managed to snag only a few names. Alas, many of the artists brought no cards. I will list the names I remembered like, Anders and Jane, who chalked the Tamara de Lempicka style image.  When I finagled my way over to ask for a card the guy said they didn’t have one but muttered, “Anders and Jane.” I waited. Shaking his hair out of his face he looked straight at me, “That’s all.”  Then he was back to finishing the chalk art.  He wiped his sweat mixed-with-chalk brow and I turned and stepped on Tamara…by accident. It was tight maneuverings. 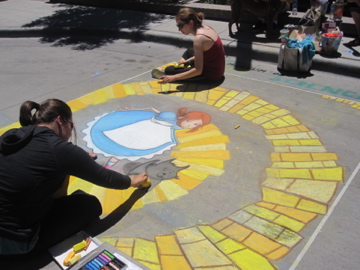 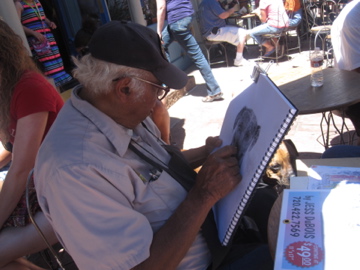 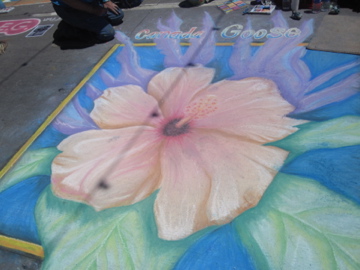 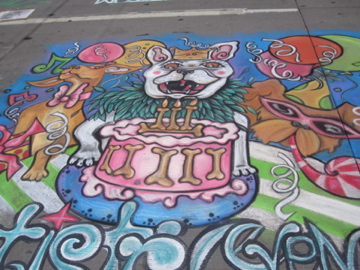 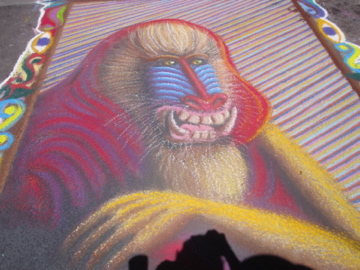 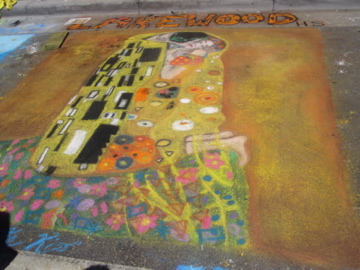 Artist’s names I managed to get at the Chalk Art Festival:  Eric Matelski – Bob Ross; Mary from Gustermans Silversmiths, one of my favorite chalks – Madonna; Lauren Bassett, Genna Panzarella, Tadd Moskal. I apologize to all the other artists for not getting their names.

I spotted Denver artist Jess DuBois at the Market Cafe. He was enjoying his shady spot on the patio while sketching a rambunctious boxer who didn’t want to be there. 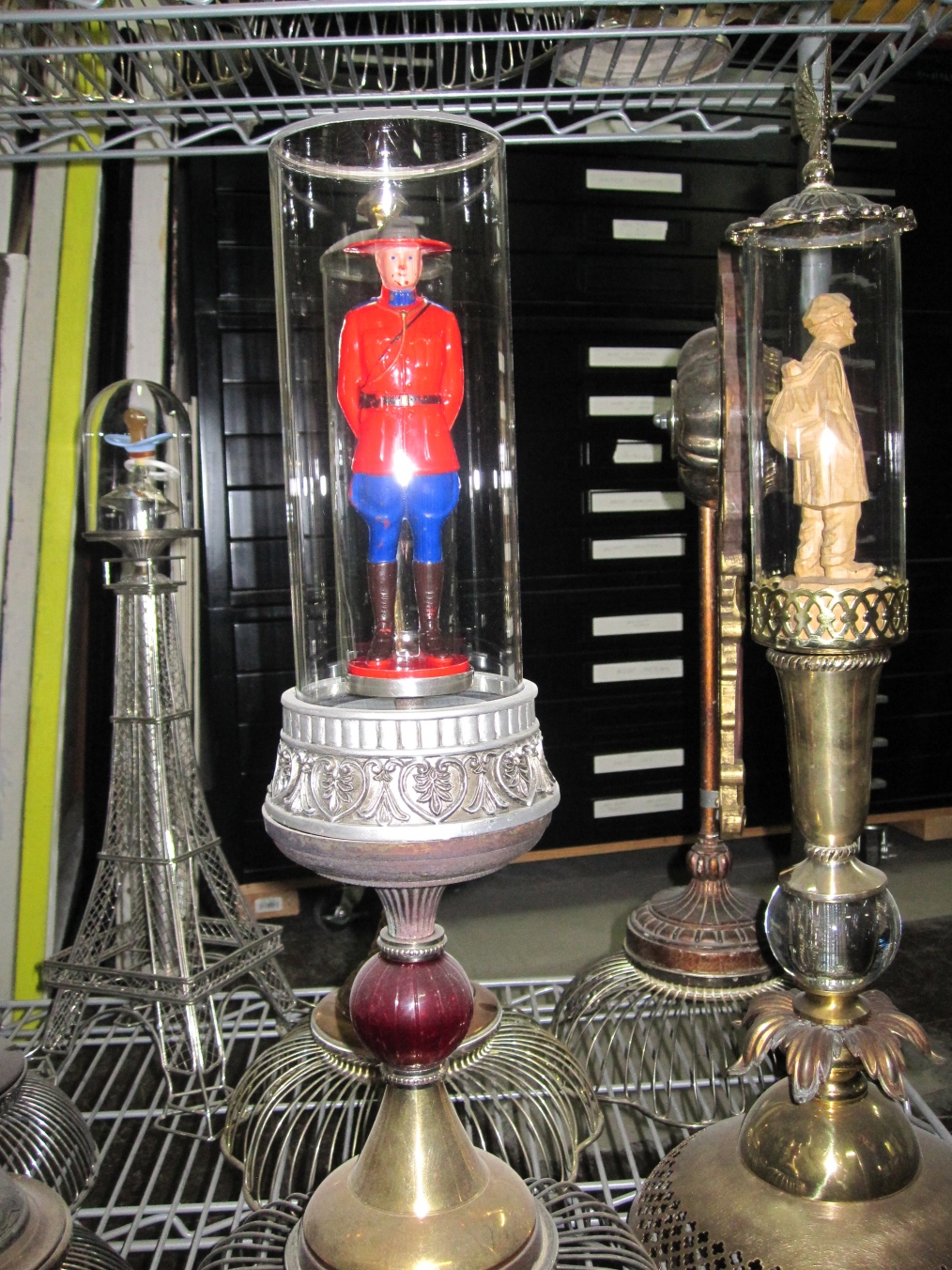 Artist, Jerry De La Cruz, corrected me on the phone.  He has been creating art with ‘found’ objects for years. There’s nothing new about the upcycled, repurposed art seen in festivals and galleries around Denver lately. It is not a newly recognized phenomena in art, he let me know.  What De La Cruz is creating can be defined as ‘reliquaries‘. Definition: a shrine or container for sacred relics.

In his studio is a bizarre mix of antique lamps which he grinningly unshackles to reassemble into a new work of art. There are hundreds of shelves of objects from garage sales, dumpsters, vintage stores and Goodwills. Your eyes move from knick-knacks, lamps, toys, vases, wire bowls, balls, dolls, religious icons creating a sort of fearful, intrusive, creepy peek into a stranger’s eccentric back room of an old curiosity shop.

He’s a contemporary, multi-disciplined artist who explained,  “The reliquaries are just one of my current explorations and do not define my work per se.”

Amidst his fascinating studio with glass eyes and strings and objects staring at me, Jerry and I sat on the old band stand in his one hundred year old studio/home just west of the Santa Fe Art District while I interviewed him for the first Denver Art Project.

1. What inspires you these days?

I’m always inspired by high craftsmanship in all areas of creativity.  As an example, the craftsmanship found in churches. It was the art churches paid for like sculpture, altars, windows. Human beings made this art. When I visit churches in Europe it’s like an archeological discovery of things created by humans.

Kill your heroes, that’s what I say. Really. As you age, your heroes don’t last long. If I had to pick I’d say Toulous Lautrec, Salvador Dali, Diane Arbus, Francis Bacon, Lucien Freud, and Gerhardt Richter. These are artists who have fluctuated a lot and traveled in different directions with their work, especially Richter. Like myself, they’re all over the place.

3. What is your idea of perfect happiness?

It doesn’t exist. O.K., happiness to me is living in a world where two or three things work: health, enjoying what you’re doing, and no pitfalls, like, nothing gets in the way. You may not have a plan every day but you get started, get through it, go to bed, start over the next day. It’s how one travels through life, quality over quantity.

4. What scares the hell out of you?

As a child I did experience scares of that magnitude especially with horror movies or nightmares but as an adult, nothing really.  Even after I was drafted into the army in 1968, I was not overwhelmed with fear that I might end up in a war zone.  I have fears  as most humans do but I would not say that any one of them scares the hell out of me.   I would imagine that this question would likely bring up the issue of death  or dying but they do not hold that much power over me though I must admit that I found a certain amount of comfort in a quote by Woody Allen, “ I don’t mind dying, I just don’t want to be there when it happens”.

5. What makes you laugh hard?

Things that aren’t necessarily meant to be funny, like humor found in conversations with friends, puns within the conversation as an example, and not so much that coming from comedy routines or professional comedians.

6. Who are your favorite artists of all time?

Edouard Manet is one of my favorites. I saw one of his paintings at the Musee d’Orsay and it stopped me in my tracks. The execution left me in awe.

7. What is your guiltiest pleasure?

8. If you could change one thing about you, it would be?

9. What’s your favorite thing in the world?

Like if the house was burning? Besides Diane it would be my painting titled, “Then I found myself…in the bushes searching for that hunk of lead.” That is my story on canvas. One panel depicts me at 23 years old, the other at ten years old.

10. What comes to mind when you think of Denver?

My visual image of Denver is a very attractive, clean atmosphere with a lot of interesting elements. It’s a city but a city that still has great neighborhoods.

Since you’re about to make Miami your winter home, what comes to mind when you think of Miami?

It is culturally diverse and the magnitude of its diversity comes to mind.

Project Angel Heart is excited to announce the eleventh annual Art for Life event on Friday, August 24, 2012, to be held at the Abend Gallery in Denver. Join 500+ community leaders and art lovers for an evening of hors d’oeuvres, cocktails, wine, desserts, good company, and fine art. Guests will have an opportunity to view and bid on the works of more than 80 local and internationally recognized artists who have donated work in support of Project Angel Heart. Once again, we are proud to partner with the Denver School of the Arts and Art Students League of Denver to highlight emerging artists.