Can’t get enough of Vivian?

I’ve been obsessed with the mystery of photographer Vivian Maier since I first read about her, probably a year ago. The documentary is now showing in Denver at the Esquire Theater.

Thank God, John Maloof bid on a box of negatives at a Chicago storage unit. He casually sifted through them but was hoping to find historical references for the book he was writing. Once he determined there was nothing of significant historical value he put the box back in the closet. Curiosity forced him to open the box a second time and scan some images. What he found were hundreds, thousands of photos that suddenly seemed to be not only great photography but a treasure trove of art snapped by an absolutely unknown person, Vivian Maier.

The mystery expanded as her art unfolded, her photos and life story loosely pieced together. The woman behind the camera was a secretive person who took care of other people’s children and entertained herself and her charges by trekking through the worst parts of Chicago, her camera around her neck.

The results are astonishing, fascinating and beautiful. Vivian Maier, (b. 1926-2009) was an artist. Unraveling her story is part of the art and mystery of this strange and lonely woman. The documentary sheds light on a small piece of the puzzle. The questions asked like who was she, why did she take so many photos and never develop them, who was this woman who gave her name as V. Smith, among other aliases, inferring at times that she was ‘sort of a spy;’ she was born in NYC but had a noticeable French accent, who was she?

‘Finding Vivian Maier‘ is captivating. I still can’t get enough of Vivan. Fortunate for people like me who love stories like this, and thanks to John Maloof the world is still developing hundreds of thousands of her photographs. She was a curious soul who found art in the down and out back streets of Chicago. Her camera focused on people living through a bad day or a woman out on the town. Through her camera she was passionate, stylish, compassionate, friendly, social, happy.  Vivian more than any one, was aware her subjects had a story that was far more interesting than the one she could tell. She didn’t need words.

Now, we get to piece together her photos and the woman who lived through her Rolleiflex lens. Vivian Maier, a 20th century artist with the eye of an Otto Dix, Diane Arbus, Rembrandt, Nan Goldin. Her photos tell us what she knew. We’ll never know all we want to know about Vivian Maier. 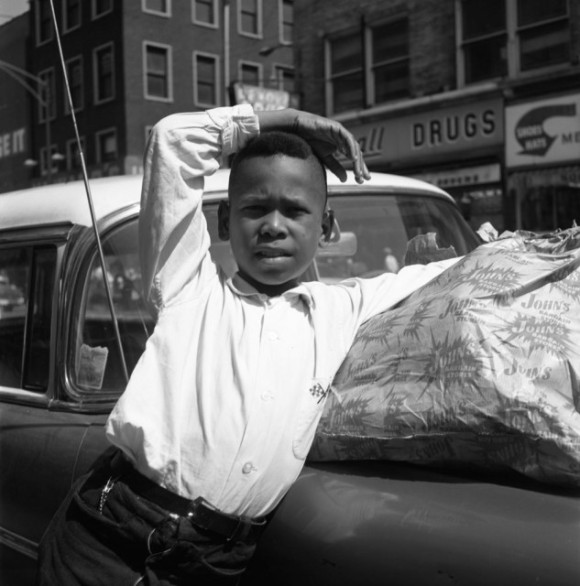