What I’ll remember about visiting the Becoming Van Gogh exhibit is how many people brought their young children, like four to five year olds and younger. I understand wanting a young child to see Van Gogh’s work, but, really.  Mothers and fathers seemed to think it was acceptable to give an art history lesson out loud. Grrrr. As it was, I didn’t feel too badly about my coughing and stepping in front of the people with the audio headphones who stood in front of a painting for..ever.  It is the flu season after all. Alas, I wasn’t fortunate enough to make it through the season unscathed and after canceling my ticket once, I downed a couple of Emergen-C’s, wrapped myself in a warm scarf and made my way through Becoming Van Gogh.

It was an ambitious undertaking. Not just getting through the throngs of visitors, but I imagined someone in the back room of a museum somewhere designing this smash hit by gathering 70 paintings and drawings of the wildly eccentric, dedicated artist, Van Gogh, then, creating a brilliant story board and narrative about how Van Gogh became Van Gogh. The exhibit illustrates the creative time line in the career making of an artist. b. 1853 – 1890.

I learned that VG was like many people I’ve known. After many false starts at life, accompanied by his eventual fatal mental illness, he decided to become an artist. The most endearing of his artistic traits, once he decided to be an artist, was that he put his mind to it and became as you know an exceptional and unforgettable artist. He embraced his career path seriously by beginning at the root of art. He learned to draw and he drew and drew until his art morphed into paintings and then he became fascinated with color. It’s what we now envision when we see the name Van Gogh – we think color.  He became a beautiful colorist by meticulously studying, defying and questioning the rules of art. 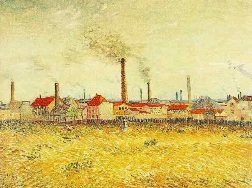 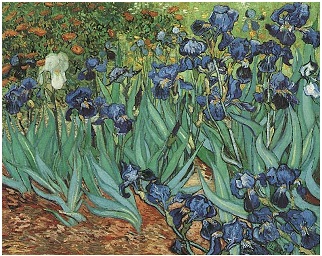 Think of a ball of yarn with these color combinations.

My favorite take away was learning how he would wind different colors of yarn into balls to experiment with color combinations before adding them to his canvas. Look at his most colorful works. You’ll see how the contrasting colors literally pop on his canvases as they lay side by side. He was a genius and a tireless artist, who despite his mental imbalance and desperate straits, along with a God given talent, skillfully fine tuned a short, but distinctive style of art that is undeniably Vincent Van Gogh.

It’s what every artist strives for.