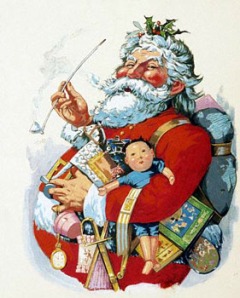 Don’t know about you, but I clung to my Santa beliefs way too long. Even now, I believe Santa Claus is the man in the beautiful Christmas illustrations drinking a bottle of Coke. He was a mysterious man who shushed the dogs as he snuck into every child’s living room to fill the stockings.  The image we carry today of the jolly, generous, sweet faced, rolly-polly man named Santa Claus was a amalgamation of three artists imagination: Clement Moore, Thomas Nast and Haddon Sundblom.

In 1931, Coca-Cola, of Atlanta, Georgia commissioned Haddon Sundblom to create a Christmas ad campaign first published in the Saturday Evening Post.  The well-known illustrator conjured his character from Clement Moore’s description of a jolly ole Saint Nicholas from his Christmas poem, of 1822, “Twas the Night Before Christmas,” and, from the 1862 Thomas Nast wood engraving of Santa Claus, commissioned during the Civil War by Harper’s magazine for it’s December cover. Nast can be referred to as the creator of what has become the American Saint Nicholas we know today.  Sundblom improved it.  He took each Santa image he knew and added the personality and cheery persona of one of his best friends, Lou Prentice, a fellow Chicago advertising colleague. Emphasizing the well-known round rosy cheeks and a white beard, Sundblom painted the quintessential image of good cheer and the happy glow of families at home at Christmas time.

Sundblom was a natural artist. Not only did he create our beloved Christmas icon but he also created the icons Aunt Jemima and the Quaker Oats Quaker. He was influenced by 20th century greats such as Howard Pyle, John Singer Sargent, Robert Henri, Anders Zorn, Joaquin Sorolla, who were known as practitioners of an art style familiar to the Impressionists called ‘alla prima’ or ‘the first stroke technique.’  It’s described as a technique where an artist consciously lays down the fewest strokes in the quickest time to ‘sufficiently describe moving targets.’  Legendary stories tell of Sundblom finishing a painting in one sitting.

“His eyes-how they twinkled! his dimples how merry!
His cheeks were like roses, his nose like a cherry!
His droll little mouth was drawn up like a bow,
And the beard of his chin was as white as the snow.”