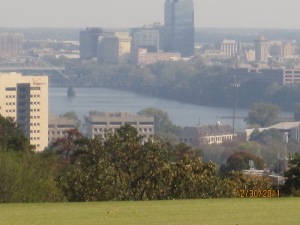 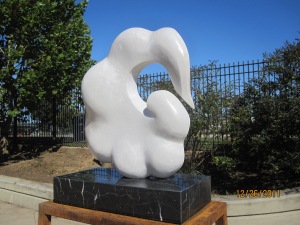 Is there anything in the whole world better than old friends? I think not. I had the distinct pleasure last week of seeing childhood friends in Little Rock and at the same time, seeing friends from my Art Revue Magazine days in Loveland.

In October I had free time on my hands. My oldest friend in Benton, Arkansas, needed help with her campaign in the small city south of Little Rock. I pulled dates out of a hat for the best airfare then luckily landed in Little Rock the week of the sculpture show.

What I loved most about the River Market Sculpture Show, every sculptor I spoke to loved Little Rock. I’ve always found it hard to believe people do not know Little Rock, Arkansas, and most have never been there. Just to let you know, it’s a beautiful city with the Arkansas River running through it and like Denver, it sits under a classic cityscape and growing art community. The Clinton Library sits on the river at the East end of the River Market area in downtown. The revitalized neighborhood is alive with restaurants, bars, clubs and hotels.  In the last ten years the city has created a beautiful walk along the river banks dotted with sculpture, most of them Colorado artists.

All those familiar faces from two distinct areas of my life was just enough to make me lightheaded, considering my cold and all, you can understand my confusion. Here I was in my beloved Little Rock with childhood friends beside me while talking to Dee & Kevin & Denny & Sandy…I had to stop and remember where I was again & again. It was a great homecoming and a humbling reconnect with the many friends I made in Loveland years ago. Together, during those years, 1990-2004, when Loveland was finding its niche we became an art community and I like to think we all helped in our own way to put Loveland on the art map.