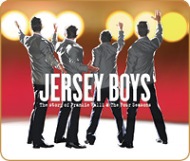 Jersey Boys is one of the most fabulous Broadway shows I’ve ever seen. Some theatre goers love Les Miserables or Phantom of the Opera. This show is strictly for the toe tapping, lover of musicals. You know the kind that make you smile and wish you were on the stage with the actors. It’s the show of shows. Trust me. You’ll love every song. The storyline moves fast and there is not a dull moment in the two plus hours of sheer entertainment. We are fortunate the show has returned. Take my word, you do not want to miss this again. If you saw it four years ago, well, you better get your tickets again. It is way too good to miss this summer.

Nearly 90,000 theatergoers cheered when Jersey Boys made its sell-out premiere in Denver in 2008. Worldwide, more than 12 million people have seen Jersey Boys. And now, the show that made critics and audiences cheer is “Working Its Way Back” to Denver!

Jersey Boys is the Tony®, Grammy® and Olivier Award-winning Best Musical about Rock and Roll Hall of Famers The Four Seasons: Frankie Valli, Bob Gaudio, Tommy DeVito and Nick Massi. This is the story of how four blue-collar kids became one of the greatest successes in pop music history. They wrote their own songs, invented their own sounds and sold 175 million records worldwide – all before they were 30! Jersey Boys features their hit songs “Sherry,” “Big Girls Don’t Cry,” “Rag Doll,” “Oh What a Night” and “Can’t Take My Eyes Off You.” “It will run for centuries!” proclaims Time.

One thought on “Jersey Boys Returns”