Legends made in Denver: Drag Queens, too 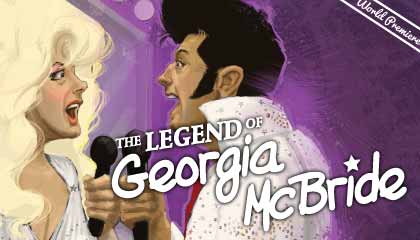 It’s common knowledge, Denver is a first class theatre city. I heard a friend brag we are second to New York City. While I can’t give you the bonafide stats on my friend’s statement, it’s not far from the truth.

Join me while I raise a glass of bubbly to the Denver Center Theatre Company’s new play program, because, due to their professional and ceaseless drive for quality literary plays, Denver has officially been named one of the top five theater companies in the country. The success comes via the annual development of new plays and musicals. The innovative program named the New Play Development Fund enables Denver to commission the most talented playwrights and host the Colorado New Play Summit every year. It is through this landmark program that playwrights have a chance to read and perform their work to an audience of professionals from New York to Los Angeles.

A few plays (born in Denver) you may have seen since 2008, are Plainsong, Eventide, Grace, or the Art of Climbing, The Whale, Two Things You Don’t Talk About at Dinner, Black Odyssey and the latest The Legend of Georgia McBride – the 2013 New Play Summit runaway hit.

Georgia McBride premiered last week to a devoted audience. The stage setting was decidedly apropos. Produced on a smaller stage the performers appeared about ten feet tall. Elvis swallowed up the stage as he opened the show in his white sequined jumpsuit. The story unfolds to an Elvis impersonator who is bumped to accommodate the bar’s new theme – drag night.

The audience quickly becomes enchanted with kitschy karaoke and drag queen antics. Hilariously enhanced by talented actors with the unimaginable storyline of a straight, married drag queen.  What follows is uproarious theatre by four (4), only four (the audience is completely blindsided by this) highly professional actors. It is enchanting and clever theater brought to life by the young and distinctly talented New York playwright Matthew Lopez. Kudos to Denver for choosing this spectacular mix of inventive dialogue peppered with high camp in glitzy costumes. DON’T Miss The Legend of Georgia McBride.

FYI: Denver has remarkable Drag Queens, i.e.,  Daniella DeCoteau (the audience was thrilled with her performance at the cast party / opening night celebration), Nuclia Waste, Shirley Delta Blow, Izzedead MotherEffer and Minor Misdemeanor to name a few. You can see one of the best drag shows monthly at Hamburger Mary’s on 17th Avenue. Trust me, it is as good as any show I’ve seen. Yep, better than the infamous Lady Chablis from Midnight in the Garden of Good & Evil, by John Berendt. On a recent trip to Savannah we caught a once a month performance of her popular show. Regrets to Miss Champagne. Hamburger Mary’s drag queens (and show) are hands down superior to the most famous Drag Queen of the 20th Century.

FYI (2) : February 7-9, is the 2014 Colorado New Play Summit featuring five readings by playwrights such as Eric Schmiedle, reading his Benediction by Kent Haruf. Other readings include Appoggiatura by James Still, The Comparables, by Laura Schellhardt,